The WR250R is known to have a flaky fuel pump in some 2008 and earlier models. Mine's a 2009, and while I haven't had a problem with my fuel pump, I wanted to understand the issue better and do some preventative maintenance at the same time as upgrading my fuel tank.

There are many good posts online about how to remove the tank and fuel pump assembly. Rather than repeat that information, I'll just add some tips and clarify some points that I would've found helpful along the way.

Removing the old fuel pump
The top and bottom parts of the fuel pump assembly are snapped together with three moulded tabs. It is entirely possible to pry apart the assembly and ease out the old pump in a few minutes without damaging anything if you follow these tips: 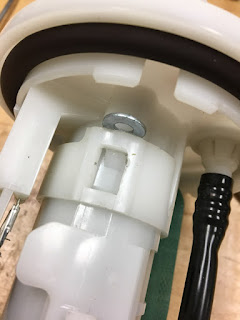 Choosing a new fuel pump
Yamaha sells the fuel pump only as part of the complete assembly you unbolt from the bottom of the tank. It costs about US$350. However, unless you've somehow broken the plastic, there's no need to replace this whole assembly and instead, you can just replace the fuel pump mounted inside.

Some searching of forum discussions led me to this Kemso kit from eBay for about CAD$40. 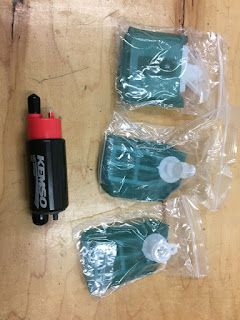 The pump itself is made in Japan and appears to be well made and almost identical to the OEM pump. The kit includes three versions of the intake filter; one matches the WR250R original. 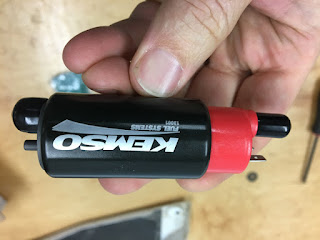 Original fuel pump is on the left. The filter installs easily with a ring washer that I pressed on with a small socket. 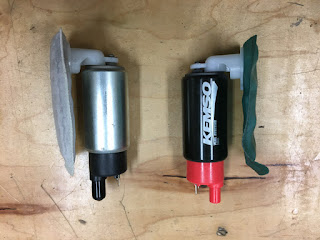 There's a small o-ring inside the top plastic frame that I figured (after assembling and disassembling the plastic twice) is more easily installed by mounting it on the fuel pump first. 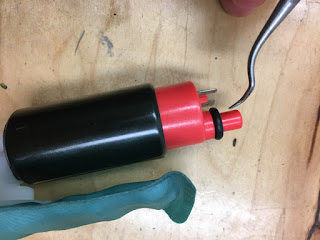 Here's the new pump in place, ready to click the frame back together. Don't forget to install a new piece of heat-shrink tubing over the top connector on the blue wire. 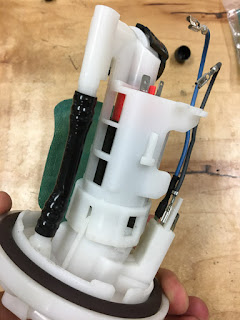 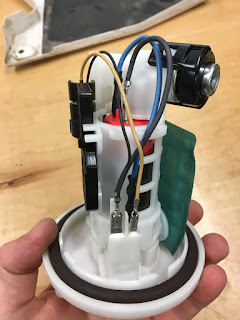 Sharp eyes will notice that the pump seal around the bottom is a thick o-ring, not the original rubber seal. This is what came with the IMS 3 gallon tank I ordered.

Having looked at different tank options, I concluded that the extra gallon of the IMS 3.0 over the stock Yamaha tank would eliminate my frequent need to refuel from my 1 gallon RotoPax. In theory the IMS should give me about 250km of range, which is plenty for my current needs. Plus I can still carry an extra gallon (3.8L) in the RotoPax, for almost 100km of safety margin. 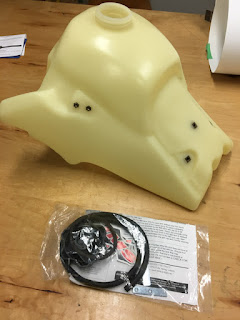 The "clear" tank was a little cheaper than black, and I might as well benefit from being able to see how much fuel is really left. Aesthetically though it's bag-on-head quality--as you'll see in a moment. Also, the cap vent line is just a hose so something like this would be nicer. 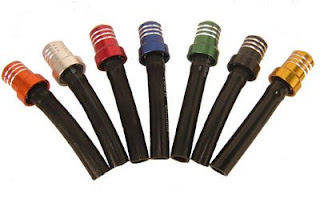 Here's the fuel pump assembly bolted on with the o-ring provided by IMS. The o-ring is a really stiff material that deformed the plastic unevenly when the pump base was tightened. I didn't like the reliability implications of this stress, so I decided to use the original seal which reduced distortion and hasn't leaked so far just sitting in my shop. 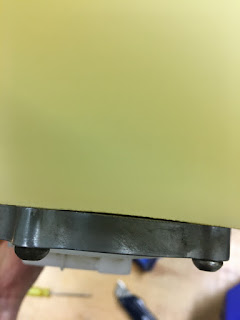 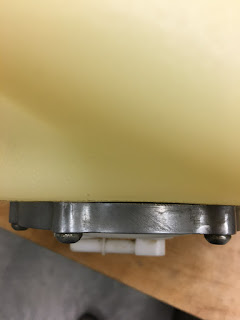 And here's the assembly all tucked in and cozy in its little chamber of horrors, as seen through the filler hole: 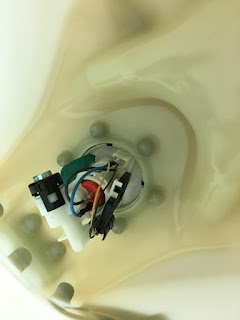 The original tank (right) is covered with foam reflective insulation. I figured it would be a good idea to similarly protect the bottom of the plastic tank. The Yamaha insulation was remarkably similar to some inexpensive pipe wrap I bought at Home Depot for another project. It stuck to the IMS plastic no problem. 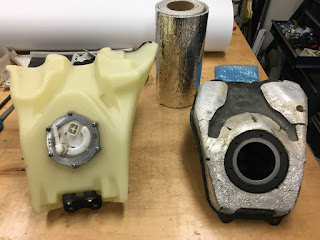 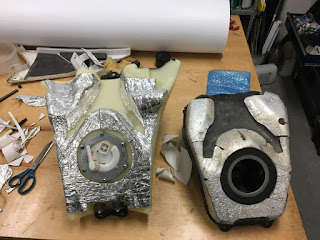 Installing the IMS tank revealed fit issues on the left side (the right side fit fine). No amount of persuasion and trickery could eliminate this unsightly gap between the panels. And it wasn't because of the insulation I had added; same problem without! 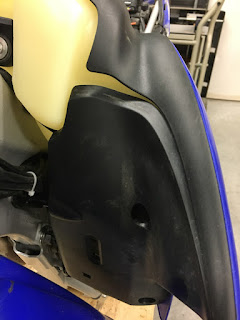 In an age of 3D scanning and CAD, I think this fit issue is unacceptable and a major strike against the IMS 3.0 gallon tank. However, I need the additional tank volume so I decided to try to make the best of the situation. That entailed some ghetto masking with a rubberized tape to make the gaps less obvious. Really embarrassing workmanship here, but I couldn't see an alternate approach without heating, cutting, or bending plastic--which introduces a whole bunch more problems. I'm not the only one to complain about IMS fit; I just thought it would've been fixed by now. Caveat emptor! 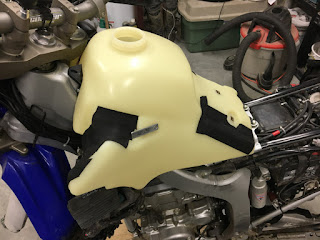 Right side fits fine, although there's a noticeable gap along the seat bottom as well. IMS really needs to fix this, but probably won't because the market is diminishing. 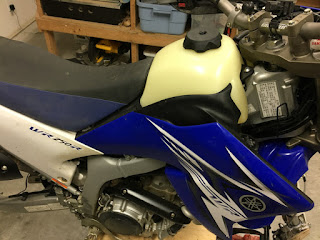 Having ridden this upgrade hard for a season now, all seems to work fine. No hiccups with the pump performance, and no leaks on the tank using the original seal (not the IMS included seal). The unsightly gap between the tank and shrouds still bugs me, but the relief of having 250km range in the tank is well worth the tradeoff.

Posted by Frankenbuffer at 10:58 AM