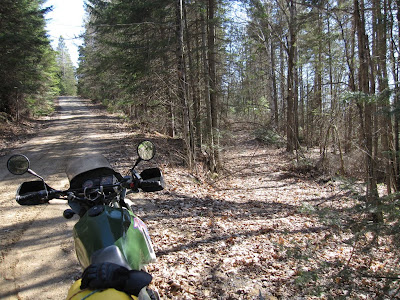 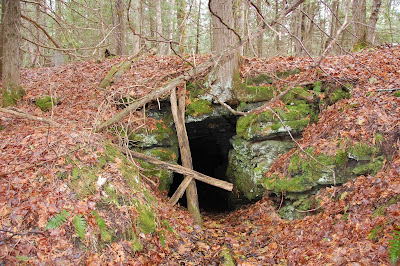 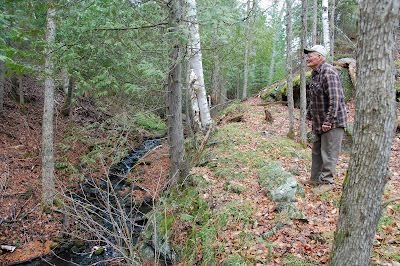 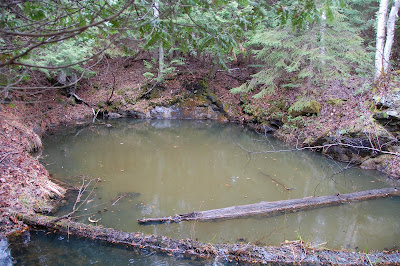 Recently the weather was crappy and I wasn't feeling so hot myself, so I figured it was about time I gave the "Mayor of Wilbur", Bud Thomas a call to see if I could interview him. Bud grew up in Wilbur out on the K&P rail line, and his grampa worked in the Boyd Caldwell mine nearby back in the late 1800s. His mom cooked and cleaned at a local rooming house which has long since disappeared. She'd been down in the mine as a little girl. Bud is a rare treasure of oral history about a fascinating and all but lost part of early Canadian settlement. I spent three hours with Bud asking him about his experiences growing up in the Lavant Station area and recorded all of it. I plan to edit and submit the recordings to the local archives, and will post some clips here.

Bud's getting on in years and his health isn't so good, but he's full of energy and stories. We started our conversation in the kitchen of his old frame house, wood smoke in the air and whisky on the table. As you can tell from the audio clips I'll post, I'm no professional interviewer. I just wanted to get Bud talking. Before long we were out sitting in his white Lincoln Town Car (license plate: "KP LINE"), bouncing along the KP Line itself on a mission into the bush. I have to say, I'd never gone off-roading in a Lincoln before. It was touch-and-go several times as Bud patiently and expertly guided us down narrow trails, through beaver floods, over boulders, and down wet grassy slopes. But we made it to our destination: the site of Wilbur town, and the sites of the old Boyd Caldwell and Wilbur mines nearby.

I'd been in this area before, looking for evidence that there used to be a town of 250 people here. I thought I knew where I was looking. I was wrong. The signs were so subtle there's no way anyone would see them unless you know exactly where to look. Bud described how the area used to look 70 years ago. There were open meadows, roads, houses, train tracks, tall piles of mine tailings, boardwalks, and electric lights. Both Wilbur and nearby Lavant Station were important industrial towns in Eastern Ontario in 1884. Kids came from all over to attend the Wilbur school. Miners, lumbermen, farmers and their families came to town to drink, dance and socialize. Then the bottom fell out of the iron market in the late 1800s. It was no longer economical to run the Wilbur mines and ship the ore to Pittsburgh for smelting. The mines shut for good. Or did they?

Bud told me a story about how the mine owners tried to raise money to "reopen" the mines. They visited all the hardware supply stores in the area and bought up all the tar paper that locals used to roof their shacks. Then they burned the tar paper down in the mines to create thick clouds of smoke, like the coal-fired water pumps and air compressors made. Photos were taken to show how the mines were "operating" at full steam in an attempt to persuade people in New York to fork over more capital. It was all a scam of course, and the mines soon shut for good.

With no hope for a local economy, the town of Wilbur on its spur of the K&P quickly faded away. Locals pulled out the rails and any other metal they could find to sell for scrap. Beavers blocked a stream which flooded a marsh and submerged the old rail spur past town. The rail line to the mine head washed out as nearby ponds flooded. Shacks and houses decayed, bricks crumbled, and nature worked its inexorable fingers into anything manmade. By the 1930s, Bud said there were only foundations covered with old flooring left to see. Forestry operations soon ran over those remains.

Now, as you walk around the dense bush that has overgrown the town and mine sites, you need a keen eye to see signs of former industry. Bud hadn't been back here in 65 years and he was surprised by how much it had changed. But he has a keen memory, and he recalled where the trails were, where so-and-so's house used to be, where the caves were that a childhood friend of his used to crawl into, and where a huge henhouse used to stand. He showed me a square-cut cave in a rock where a local used to store his food. Now all that remains are vague impressions in the ground on suspiciously straight lines, and scraps of metal, brick and old railway ties.

I've been in touch with local landowners about getting access to more of the site and family archive so I can do more research. Unfortunately, there's been a longstanding dispute about who owns what in the area and access has been a bit delicate. While I'm no Pierre Berton, I'm passionate about studying our heritage and I hope that we can overcome these challenges together and better document this story for future generations.

Photo 1: Entrance to the "Lower Road" off Bottle Lake Rd., which leads directly to the centre of old Wilbur. Bud used to maintain this road. It's been impassible since the ice storm of 1998.

Photo 2: The cold storage cave in Wilbur town site where a man Bud knew used to keep his meat, vegetables and butter. From marks and other signs in the area, it looks like it might have originally been a test shaft for the mine.

Photo 3: Bud looking over the old rail spur beside the mine. This gully was blasted out of the rock and now a stream flows where rails used to be. Remnants of rail ties and the odd scrap of ballast give it away. Behind Bud and over the slope to his right is the main mine shaft. There are huge tailings pile nearby.

Photo 4. The mine head. I'm not sure yet if this is the Boyd Caldwell mine or the Wilbur Mine, but I think it's the latter. Bud showed me the other minehead on the hydro cut. It's not at all obvious. This one still had rails sticking out at an angle, and nearby you could see where the mine lift was located to pull ore out on the rails. This mine was about 70' deep. The pool is about 80' across. It was pouring rain and hard to get a good shot here.
Posted by Frankenbuffer at 5:24 PM